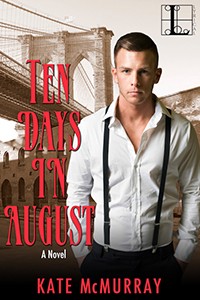 To this point, most of my novels have been contemporary romances, but historical fiction has long been a love of mine. I like reading fiction, and romances in particular, that feature rich historical detail. So it was really only a matter of time before I tackled historical romance myself.

Also, being a New Yorker, I wanted to set my historical novels in New York City. Ten Days in August is set in 1896, during New York’s Gilded Age, a time period that is actually uncannily similar to the British Regency. Like the ton of the Regency, New York had the 400, so named because it was said social arbiter Mrs. Astor could fit 400 people in her ballroom. New York didn’t have dukes, but it did have elite families—new money families like the Astors and the Vanderbilts as well as old money families like the Livingstons and Schermerhorns—that acted much the same. The families held lavish balls, called on each other for social advantage, kept liveried servants in their home, and arranged marriages between the families to secure the next generations place in the elite.

The 400 play a small role in Ten Days in August, but the book is more about a police detective, Hank Brandt, who works for Police Commissioner Theodore Roosevelt, in a precinct populated with immigrants packed into tenements alongside bars and dance halls filled with, let’s say, less reputable members of society. But Hank’s childhood best friend married a steel magnate, and there’s a critical scene in a ballroom—but it’s got a twist. You’ll have to read to find out about that!

The bottom line is that this particular moment in New York City history was really fun to write about. I like pulling from familiar tropes and settings and putting my own spin on them. Hopefully the end result is a romantic story in a little bit of a different setting that many people enjoy as much as I enjoyed writing it. 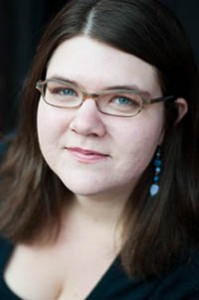 Kate McMurray is an award-winning author romance author and an unabashed romance fan. When she’s not writing, she works as a nonfiction editor, dabbles in various crafts, and is maybe a tiny bit obsessed with base­ball. She is currently president of the New York City chapter of Romance Writers of America. She lives in Brooklyn, NY.

From the Lower East Side to uptown Manhattan, a curious detective searches for clues on the sidewalks of New York—and finds a secret world of forbidden love that’s too hot to handle…

New York City, 1896. As the temperatures rise, so does the crime rate. At the peak of this sizzling heat wave, police inspector Hank Brandt is called to investigate the scandalous murder of a male prostitute. His colleagues think he should drop the case, but Hank’s interest is piqued, especially when he meets the intriguing key witness: a beautiful female impersonator named Nicholas Sharp.

As a nightclub performer living on the fringes of society, Nicky is reluctant to place his trust in a cop—even one as handsome as Hank. With Police Commissioner Theodore Roosevelt cracking down on vice in the city, Nicky’s afraid that getting involved could end his career. But when he realizes his life is in danger—and Hank is his strongest ally—the two men hit the streets together to solve the crime. From the tawdry tenements of the Lower East Side to the moneyed mansions of Fifth Avenue, Nicky and Hank are determined to uncover the truth. But when things start heating up between them, it’s not just their lives on the line. It’s their love…