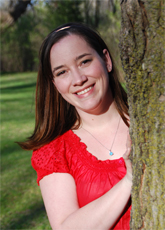 Stacey Kennedyâ€™s novels are lighthearted fantasy with heart squeezing, thigh-clenching romance, and even give a good chuckle every now and again. But within the stories youâ€™ll find fast paced action, life threatening moments and a big bad villain that needs to be destroyed.

Be sure to drop her a line at www.staceykennedy.com, Facebook and Twitter, she loves to hear from her readers.

Please tell us about yourself and what made you start writing?

My novels are lighthearted fantasy, heart squeezing, thigh-clenching romance, and even give a good chuckle every now and again.Â  Iâ€™m not a planner.Â  I donâ€™t write with a set idea because no matter what I plan, the charactersâ€™ voices always come through and demand I listen to them. So, I gave up trying to fight it!

The journey as a writer all began when I was a teen and wrote poetry, whichÂ still to this day I pull out to have a good laugh.Â  Later on, I tried a couple of times to put a book together with no such luck.Â  Couldnâ€™t ever get past the first few chapters.Â  But once I was exposed to the paranormal world, ideas came quickly.

At first, it was a way to keep my brain alive since being a stay at home mom can be a little letâ€™s sayâ€•numbing. It was an escape from screaming kids, dirty diapers and plain old mom duty.Â  It started as a hobby, but as the stories progressed it became a passion. Now, I indulge at nap time, especially the juicy bits! Every mom needs a good thrill!

How long did it take before you were published? Was it everything that you thought it would be?

After I finished my first story, The Willow, it took around six months to get that publishing contract in my inbox. It was everything I wantedâ€¦and more. Â Iâ€™ve learned a great deal since I released The Willow, and every contract Iâ€™ve received since still makes me jump up and down in excitement.

Can you tell us a little bit about your new release? How did you come up with the idea?

My latest release is BIND ME ~ Pact of Seduction Book One. I came up with the idea because I wanted to write a story about four best friends. Add in the fact that I wanted to include their ultimate fantasy, and I knew itâ€™d be a fun series to write.

What propelled you to write urban fantasy/paranormal romances?

I love the paranormal romance/urban fantasy genre and love a series more!! Nothing can hook me in more than an adventure and one that keeps on going. I love a page turner, one where Iâ€™m up at a ridiculous time and my eyes burn because I canâ€™t stop reading. Witty characters, dominant men, danger, action, romance and hot sexâ€•oh my!

Did you have a solid support system when you chose to write romance or did you have anyone disapprove of your decision?

My family is very supportive of my writing. In truth, though, they donâ€™t really know what I write. When I was first published, The Willow has love scenes, but theyâ€™re â€œsweetâ€ in nature.

Do you have a daily ritual to get you in the â€œwriting zoneâ€?

I love writing the first draft of a story. I donâ€™t plot out my stories so itâ€™s much like reading to me. I canâ€™t wait to see what happens next and see where the characters take me.

The difficult part of the writing process for me is revisions. Itâ€™s always challenging, and tends to get a wee bit boring when youâ€™ve read the story ten times. Trust me, usually by the end of edits, I hate the book, and thatâ€™s how I know itâ€™s ready for publication! 🙂

What is the most extreme or wildest thing youâ€™ve done and what did you learn about yourself?

Wrote a book and then published it! I never thought Iâ€™d be an author. Never had big dreams. I just kinda stumbled upon it. Even to this day, Iâ€™m still thrilled that I can keep doing this as a career, and that readers enjoy my stories!

Any last words for your readers?

THANK YOU! I always feel honored to meet new readers, and even more so, that I give them a story that touches them in some way. I really donâ€™t have words to express how much I appreciate the support!

What should we expect from you in the future?

I have many revisions ahead of me since Iâ€™m rewriting all of my Otherworld novels, and they are being re-released with Entangled Publishing as full-length novels. So thatâ€™s keeping me busy.

Other than that, I have two new series that Iâ€™m going to release next year. I want to get them both out by early next year. Both are urban fantasy romances, and both are nagging at me to write them! 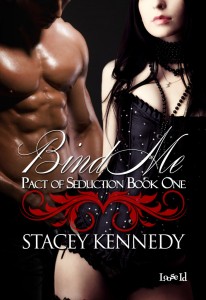 Four best friends embrace their fantasies and make a pact of seduction to live out their deepest and darkest desires. The women place their lives in the hands of fate and one short straw declares Marley will be the first to awaken her secret wishes.

As Reed guides her through a night of pleasure, Marley brings more to him than a perfect submissiveâ€“she stirs emotions in him long ago lost. By binding Marley, he runs up against his own limits, and now he has to choose between his self-protective barriers or surrendering to the wildfire Marley has reignited in his heart.