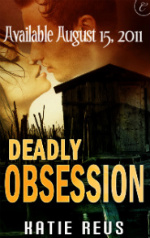 The chilling words of a killer:Â This is just the beginningâ€¦

Ten years ago, Lilly Carmichael left town without an explanation, breaking Braden Donnellyâ€™s heart. The death of her aunt has brought Lilly homeâ€“and face to face with memories she thought were long buried. Still getting over a traumatic incident from her work as an NSA agent, Lilly initially dismisses the face at her window as a figment of stress-induced paranoia.

Now the sheriff of Hudson Bay, Braden has spent the last year hunting a sadistic murderer. But his investigation is turned upside down when new evidence indicates that Lilly is the killerâ€™s next target. Determined to protect the woman heâ€™s never stopped loving, Braden must race against the clock to trap a dangerous psychopathâ€”before itâ€™s too lateâ€¦

Tell us a little bit about yourself. How long have you been writing before you sold?

How has the transition been from ePublishing to NY been for you?

Iâ€™ve always had my own â€˜personalâ€™ deadlines I like to meet but working on contractual deadlines has been a new experience. With epublishing Iâ€™m able to write at my own pace and I donâ€™t answer to anyone as far as turning something in at a certain time. That kind of freedom is wonderful. Right now I have things I have to turn in to my two traditional publishers (Harlequin & Signet) by certain dates so even if I wanted to start on another story, it would have to wait until Iâ€™m finished with these two. Luckily, I love the two stories Iâ€™m currently writing so thatâ€™s not an issue. Iâ€™m still publishing digitally and Iâ€™ve also self-published a couple novellas recently and I donâ€™t plan to give that up just because I sold to NY.

What are a few things you picked up from the publishing experience that have been a good learning tool for you?

Hmm, things Iâ€™ve learned: Donâ€™t settle for an agent just to have one. A bad agent is worse than none at all (I love mine, btw). When I signed with her my first two manuscripts were rejected by NY but she stuck by me and with the third submission we signed a 3 book deal. Her contract and publishing experience were so valuable during the whole process. Another thing Iâ€™ve learned is that good critique partners are like gold. If you have a good one, hold on to her.

What has been the toughest obstacle youâ€™ve had to overcome along the way? What was the best experience youâ€™ve had from being published?

I donâ€™t think Iâ€™ve had one particular obstacle thatâ€™s been the toughest. Constant rejection is really the main obstacle and Iâ€™ve received a lot of those over the years. After a while it gets to the point where you wonder if anyone will ever like your writing. My best experience was receiving my first advance check 🙂

You have written quite a few books for ePublishers, how do you feel about the ePublishing explosion, and now the popularity of self-publishing?

What do you feel about the self-publishing market and how do you think it will affect publishing?

I have no idea how it will affect publishing and Iâ€™d be a little scared to speculate, but Iâ€™ve recently self-published two novellas and Iâ€™ve personally loved the freedom of doing it. In addition to gaining more readers, Iâ€™ve seen an increase in sales for my backlist so for me itâ€™s been a positive experience. There are pros and cons to being traditionally published, epublished, and self-published and I think itâ€™s great that writers have more options now. They donâ€™t have to choose one or the other anymore.

Tell us about your latest book.

Deadly Obsession is a dark romantic suspense releasing from Carina Press on 8/15/2011. Itâ€™s 80,000 words and to date itâ€™s the darkest thing Iâ€™ve written. Here is the blurb:

Ten years ago, Lilly Carmichael left town without an explanation, breaking Braden Donnellyâ€™s heart. The death of her aunt has brought Lilly homeâ€“and face to face with memories she thought were long buried. Still getting over a traumatic incident from her work as an NSA agent, Lilly initially dismisses the face at her window as a figment of stress-induced paranoia.

Now the sheriff of Hudson Bay, Braden has spent the last year hunting a sadistic murderer. But his investigation is turned upside down when new evidence indicates that Lilly is the killerâ€™s next target. Determined to protect the woman heâ€™s never stopped loving, Braden must race against the clock to trap a dangerous psychopathâ€”before itâ€™s too lateâ€¦

What’s up next for you? Are you currently working on a new book?

I have a release from Harlequin Nocturne (Cravings) on October 1st (Destined Mate). In January 2012 I have a romantic suspense releasing from Carina. Then in February I have another release from Nocturne Cravings and the first book in my new paranormal series from Signet is also releasing (Alpha Instinct: A Moon Shifter novel). Currently Iâ€™m working on the third book in my Moon Shifter series.

What do you like best about the writer’s life?

I love setting my own schedule and being able to work anywhere. Granted, I pretty much work from home, but itâ€™s nice to know that I can pack up my laptop anytime itâ€™s necessary. Being a new mom, itâ€™s doubly nice working from home.

If you werenâ€™t a writer what would career path would you choose?

Ack! I have no idea. I floundered around after college because I couldnâ€™t figure out what I wanted to do and knew I didnâ€™t want to be a bartender for the rest of my life soâ€¦ If I wasnâ€™t a writer itâ€™s possible I might have continued my education to get a Masterâ€™s in psychology (I have a Bachelorâ€™s in psychology) and looked for a counseling job within the school system. But really, I canâ€™t see myself doing anything else and loving it the way I love writing.

Who or what inspires you?

Music, various places Iâ€™ve traveled, the people in my lives, books I read, favorite authors (Linda Howard will always be a fave of mine)â€¦pretty much anything and everything inspires me.

What are you reading right now?

Pleasure Unbound by Larissa Ione. Itâ€™s my first book by her.

I have an addiction to zombie movies, a couple tattoos, and I lived on a boat for one summer during my college years (a year I wasnâ€™t in school). 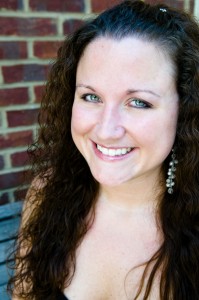 She now spends her days writing dark paranormal romance and sexy romantic suspense. Her publishers include Carina Press, Harlequin Nocturne (Destined Mate, October 2011) and in early 2012 the first book in her new paranormal trilogy will release from NAL/Signet Eclipse (Penguin). Regardless of genre, she always includes a happy ending. When sheâ€™s not creating stories she loves spending time with her husband, family and the eclectic group of animals theyâ€™ve adopted.

To learn more about Katie, visit her online at:

2 thoughts on “Spotlight On, Katie Reus”