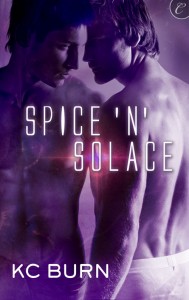 Every year, Jathan One-Moon faces increasing pressure that he marry and have children. What Jathan really wants is a male mate that can enjoy both playful sex and his more dominant nature. To tame his stress, Jathan orders a male escort from Spice ‘n’ Solace, the premier male brothel in the Galactic Allianceâ€”and is thrilled to be sent a man whose air of innocence and obvious desire for Jathan arouse him like never before.

Jathan doesn’t know he has mistaken Kazha Deinos, the owner of Spice ‘n’ Solace, as his escort. Kaz doesn’t intend to pleasure Jathan personally, but his powerful masculinity is irresistible. Kaz has dreamed of a man who’d take charge and indulge his hidden cravingsâ€”a man just like Jathan.

*KC is giving away a $10 gift certificate toÂ ARE orÂ Amazon to one randomly selected commenter — Please provide your email address if it is not linked to your profile.Â Winner will notified via email unless we announce it on the site. *

Also, conflict is the driving force behind any novel, whether itâ€™s conflict from outside sources or whether itâ€™s from internal conflict.Â  Although I personally wish acceptance was a non-issue, from an authorâ€™s point of view, the struggle of gay men and women to be accepted in society, accepted by law, accepted by the people who love them, or even to accept themselves, has very rich, emotionally laden possibilities for conflict.

And most of the stuff I write has paranormal or futuristic aspects.Â Â  Probably due to the fact that I grew up reading sword & sorcery fantasy and watching sci-fi movies.Â  The Belgariad by David Eddings was the first series of books I loved, and Star Wars was the first movie I remember watching.Â  You never forget your first loves, right?

Do you think after reading your novel any of your readers or fans would be surprised to find out you are a heterosexual woman?

From what I understand, many authors of gay erotic romance are straight women.Â  Why this is, Iâ€™m not in a position to say, although I suspect it may have something to do with the fact that women are more likely to write romance.Â  Also, many of the authors who write in this genre feel as I do – that love between consenting adults should be celebrated, regardless of gender.Â  Iâ€™m given to understand that the readers of these books are split about 50-50 between gay men and straight women.Â  So, I canâ€™t deny there may also be a wee bit of â€œif one hot guy is good, two is betterâ€ involved.Â  But ultimately, I donâ€™t believe the gender or sexuality of the author should have any influence on the legitimacy of the story.

Does your husband and friends know what you write?Â  Or care?

Being a married, straight woman has very little to do with it, except for the fact that my husband was not the first person to read the Wolfsbane manuscript, as he had been with all my previous stories.Â  I had a gay male friend read it first, to make sure it wasnâ€™t a complete crock of sh–.Â  The first time I saw him after he read it, he fanned himself and asked if Iâ€™d been a gay man in a previous life — I was pretty sure Iâ€™d, ahem, nailed it.

Then I told my husband.Â  Who was, as I expected, extremely supportive.Â  Heâ€™s one of my best editors, and so he helped me with this manuscript as well.Â  As a straight, married woman, I admit to being extremely thankful that my husband did not find it arousing at all!

Most of my friends know what I write also, and I think it actually amuses most of them to be able to tell other people about it — in fact, besides my husband, Iâ€™ve had three of my straight male friends read what Iâ€™ve written.Â  I think my favourite quote from one of them was â€œApart from the gay love substory which did nothing for me (excellently written and detailed though it was), the Umbrae/werewolf storyline was very well done.â€Â  My parents also know.Â  Most of my coworkers do not know, however.

Do you think you were able really put yourself into that experience in an authentic manner?

This is a question I get a lot.Â  Iâ€™ve also read that there are those who donâ€™t believe straight women should be writing gay fiction of any sort.Â  Everyoneâ€™s entitled to their opinion, of course, but hereâ€™s the way I see it.Â  Authors have vivid imaginations.Â  Authors always have to imagine themselves in anotherâ€™s point of view, often someone of a different gender.Â  They have to imagine, and make the reader believe in, a character whose experiences, beliefs, background, culture, family, job and emotions are different from their own.

Now, thatâ€™s not to say an authorâ€™s own life experiences donâ€™t influence themes and characterization.Â  Most of the manuscripts Iâ€™ve written have themes based on betrayal and abuse of trust.Â  I know this is a direct result of my own particular hang-ups.Â  But I donâ€™t believe for a second that an author needs to experience something to be able to write about it believably.

Romance authors regularly write about men having sex, often quite graphically.Â  Do I know, truly, what itâ€™s like for a man to have sex with a woman?Â  Nope.Â  But as far as Iâ€™m concerned, itâ€™s not that much more of a stretch for me to imagine a man having sex with another man.Â  If I have questions, Iâ€™ve got friends I can ask, and thereâ€™s also the handy-dandy internet.Â  I get as big a thrill from a reader telling me how much they loved one of my characters as I do from them saying the sex was hot.Â  Because that means Iâ€™ve done my job — created the believable from nothing but my imagination.

How are you able to make the romance genuine?

Iâ€™ve spent a lot of time trying to learn the craft of writing.Â  I donâ€™t believe Iâ€™ve learned all there is to know — I fully expect writing to be a lifelong learning experience.Â  Iâ€™ve tried to assimilate, from reading thousands of books both good and bad, what works and what doesnâ€™t.Â  I love what I write, and my characters become real to me.Â  And I think thatâ€™s one of the keys to a good story, and assist in making the romance genuine.Â  The characters have to be relatable and sympathetic.Â  The conflict has to be believable and not just the result of a misunderstanding, otherwise the book will read like a poorly written Friends episode.Â Â  The basic internal conflicts in Wolfsbane are Adam wanting to be accepted for who he is, and Carmichael being afraid to let anyone know who he really is.Â  In Blood Relations, itâ€™s the effect of secrets and lies on Cooper and Frazerâ€™s relationship.Â  In Spice â€˜nâ€™ Solace, both Jathan and Kaz need to be able to stand up for themselves and what they want while being proud of who they are.Â  I think many of those issues have been experienced by all of us, at one time or another.

Whatâ€™s next for you?

I currently have 3 manuscripts complete and on submission, and another 2 in progress.Â  They are all gay romances, although one of them is a little light on the erotic bitâ€¦ just didnâ€™t fit the story.Â  But that isnâ€™t to say Iâ€™ve completely given up on heterosexual romances.Â  I have a manuscript I intend to finish this summer and submit, because Iâ€™d like to reach a larger audience with my writing, and Iâ€™d also like to stop in at my local bookstore and see my book featured prominently.Â  That is unlikely to happen anytime soon with my gay romances, although I wish that were not the case.