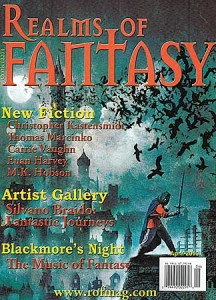 For those new to Realms Of Fantasy can you give us a little background on the magazine?

DC: Well, Shawna knows a lot more about the magazineâ€™s origins than I do, because was the magazineâ€™s founding editor and is the only person left who has been with the magazine since its first issue.Â  But Iâ€™ll add a few additional tidbits for those unfamiliar with us.Â  RoF is a full-sized bimonthly color magazine.Â  Besides the fiction and the nonfiction Shawna mentions, each issue also features interior illustrations accompanying the stories, an artist gallery, and a number of different review columns.Â  I joined the magazine back in 2005 as Assistant Editor, meaning I was Shawnaâ€™s assistant in the fiction department.Â  Actually, Shawna was the one who hired me.Â  Thanks, Shawna!Â  The magazine was cancelled early in 2009, but our current publisher, Warren Lapine of Tir Na Nog Press, stepped in a couple of months later, bought the magazine, and brought me and Shawna back.Â  I have some additional duties with the magazine thes

e days (thanks, Warren!), so everything I do now gets lumped under the title of Editor.Â  But in the fiction department, I remain Shawnaâ€™s assistant.Â  Iâ€™ll also add that our current issue is February 2010 and is available on newsstands, while subscriptions are available on our website: http://www.rofmag.com.Â  The April 2010 issue of the magazine is scheduled for release in early February.

SM: The magazine was launched in October 1994 after a series of meetings with Carl Gnam, then the publisher of Science Fiction Age. I had written to him suggesting that since Fantasy outsells Science Fiction by a factor of ten to one (back thenâ€”itâ€™s probably a larger number today), that he might want to consider publishing a fantasy magazine. In addition to the fiction, I stopped to consider what sorts of non-fiction might be of interest to the fantasy reader, and I realized that as a fantasy reader I was always curious about the folkoots behind the fantasy tropes. What was Samhain, anyway, and how did you pronounce it? (Iâ€™m still not sure!). There was only one person I knew who was qualified to write such a column, and that was the remarkable Terri Windling, who stayed on as our Folkroots editor for nearly 15 years. Thanks, Terry! I also wanted to get a real eminence griseÂ´ for the book review column, and was able to snatch Gahan Wilson (yes, that Gahan Wilson) out from under the hands of George Scithers who was at the time trying to get him as a reviewer for his magazine. Sorry, George! And of course, the fiction was the main reason for the magazineâ€™s existence, so I contacted all of my writer friends and they came through for me. Thanks, Writer Friends. And so Realms of Fantasy was born.

What is your favorite aspect of working on the magazine?

DC: For me itâ€™s two things.Â  One is finding publishable manuscripts in our general submissions pile.Â  I pass what I like along to Shawna and she makes the final call on what weâ€™re taking.Â  Itâ€™s always fun finding the proverbial needle in the haystack, and the genuine appreciation from the authors is always a wonderful thing.Â  Also, I love seeing the final artwork when itâ€™s handed in.Â  Itâ€™s always interesting to see a story brought to life visually.Â  Also, itâ€™s fun to see the finished product before just about everyone else!

SM: I love presenting high quality fantasy fiction to an audience that appreciates it. I also love finding new writers and watching them grow into major talents.

I understand you’re starting a paranormal romance column. How did that come about? What sorts of topics will you be covering? Are you looking for contributors to that column?

DC: That came about through a conversation with Warren.Â  There was a book up for potential review, something in the vein of romantic fantasy.Â  Warren wanted to know which columnist was best suited to review the book.Â  We swapped a few emails about this, and then Warren made the suggestion that we create a book column dedicated to reviewing paranormal romance/urban fantasy/romantic fantasy/related areas.Â  I didnâ€™t have to think about this long to realize it was a great idea.Â  So after figuring out the particulars to how we would handle this new column, I put out a call on my blog for interested reviewers (I would have put out a call on our website too, but it was still under construction).Â  Some amazing candidates applied for the position, making it a very difficult choice for me.Â  I suppose I should stop and explain that, with few exceptions, RoF tends to use the same group of nonfiction columnists from issue to issue.Â  So I would be choosing just one reviewer.Â  Ultimately I selected Elizabeth Bear.Â  She is a very talented, prolific, and respected author who has also done reviews for such venues as Washington Post Online.Â  She has a deep appreciation for these areas of the fantastic and her ability to deconstruct and review a story is absolutely amazing.Â  I have every confidence that she is going to do an amazing job.Â  The column will be premiering in our June 2010 issue.Â  Weâ€™re also planning to concurrently run some of the magazineâ€™s nonfiction columns on our website from time to time.Â  Right now, thereâ€™s a very good chance weâ€™ll be posting Elizabethâ€™s reviews in the June 2010 issue on the website as well.Â  We would of course encourage everyone to buy an issue of the magazine and give us a shot, but I know the majority of the readers on this site are big romance fans.Â  So if you fall into this category and youâ€™re not sure if the magazine is for you, reading this column to help you decide might be a good starting place.

The upcoming Women of Fantasy issue has already created some buzz. Why this theme now? And I know it’s listed on the website, but can you run down submission guidelines for that issue here?

SM: I donâ€™t think thereâ€™s ever a wrong time to present the work of talented women writers. Why now? Why not? Iâ€™ve always wanted to do themed issues but the timing never worked out in the past. Doug will provide you with the exact guidelines.

DC: Well, I think Shawna answered the question of why rather well. As to our guidelines, here is the abridged version: weâ€™re putting out a women in fantasy issue in August 2011. This issue will address the aforementioned topic through the magazineâ€™s fiction, art, and nonfiction. Weâ€™re currently accepting fiction submissions for this issue, which is open to women only.Â  Stories dealing with gender, sexism, and other topics important to feminist speculative fiction are particularly welcome, but are not required.Â  The stories do not necessarily need to feature a female protagonist.Â  Stories must be postmarked no later than November 15th, 2010.Â  The full guidelines can be found here:Â  http://www.rofmag.com/2010/01/12/women-in-fantasy-take-two/ The magazineâ€™s general submission guidelines can be found here: http://www.rofmag.com/contact-us/

What’s the last book you read or what are you reading now?

DC: The last book I read was THE GOLDEN COMPASS by Phillip Pullman. Itâ€™s the first book in a YA (or middle-gradeâ€”Iâ€™ve seen it shelved in both areas at the bookstores!) fantasy trilogy called HIS DARK MATERIALS. People who havenâ€™t heard of the book still might recognize the title, since there was a movie made about this one a couple of years back. Despite the fact that it was marketed to reach younger readers, the content is handled in a very mature manner and the authorâ€™s imagination is quite impressive. Adults should be able to enjoy this without a problem. And the young heroine is without a doubt the spunkiest protagonist I have ever encountered. You canâ€™t help but root for her.

As to what Iâ€™m reading now, Iâ€™m about to pick up PARABLE OF THE TALENTS by Octavia E. Butler, one of the most talented writers science fiction has ever known.Â  Everything Iâ€™ve read by her to date has wowed me. PARABLE OF THE TALENTS is the sequel to PARABLE OF THE SOWER, one of the better novels Iâ€™ve read in some time. I have every expectation this too will be amazing. After this, I imagine Iâ€™ll read something entirely different. You wouldnâ€™t know it based on my answers, but I do read outside of speculative fiction!

SM: Right now Iâ€™m reading Cutting for Stone by Abraham Vergese. Itâ€™s not fantasy or science fiction but it hold in common with those areas a very realized sense of place for a part of the world thatâ€™s utterly alien to most Americans. It makes Ethiopia sound like a sort of paradise!

Book you’re most looking forward to?

DC: Ha!Â  Thatâ€™s an easy one for me!Â  The book Iâ€™m most looking forward to is A DANCE WITH DRAGONS by George R. R. Martin (yup, another fantasy).Â  Itâ€™s the fifth book in Martinâ€™s epic fantasy series, A SONG OF ICE AND FIRE.Â  I canâ€™t even begin to describe how much I love this series, or to even describe the series itself.Â  I would fail to do it any sort of justice.Â  I really put it on a pedestal above all other stories.Â  Epic fantasy is my favorite form of literature when done right.Â  Iâ€™ve read a lot of good epics over the years, but nothing quite like Mr. Martinâ€™s works.Â  That story fills me with awe.

SM: Too many to enumerate, and too little time to read them!

What else is in store for Realms Of Fantasy’s future?

DC: Well, our website is very new, because we launched it about a month ago.Â  Weâ€™re still planning to do a lot more with it.Â  Beyond that, well, we canâ€™t give away all of our secrets, now can we? 🙂

SM: Iâ€™m looking forward to a robust future for the magazineâ€”weâ€™ve got a new publisher whoâ€™s totally energized and whoâ€™s working proactively to get us back into the marketplace. Iâ€™m excited!

4 thoughts on “Spotlight On Realms of Fantasy”